You're a Star, Larvitar!

Ash and friends report back to Professor Elm as they reach the base of Mount Silver, where they hope to return their Larvitar to its birthplace. On their way up the mountain, Ash faces a young trainer in Pokémon battle, pitting his Cyndaquil against the trainer’s Magby. This Magby—the pre-evolved form of Magmar—is much stronger that Ash unexpected, and Ash suffers a defeat. Ash makes it up in a subsequent battle, when his Cyndaquil defeats a Quilava—the evolved form of Cyndaquil. Following a few steps behind, Jessie and James note all of the trainers and their rare and valuable Pokémon preparing to battle in the Johto Championship to be held on this mountain. Setting aside their usual plans for capturing Pikachu—and their usual hot-air mode of transport—they capture Larvitar and as many other Pokémon as they can muster and drive off with them in a specially made truck. Only Ash and friends stand a chance of rescuing the Pokémon they hold dear. 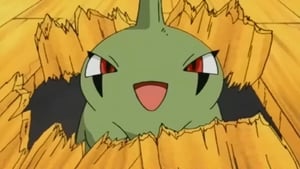