Our hero is at the end of a tough battle with Harrison at the Johto League Silver Conference. The winner of this battle will go on to the semi-finals. Each trainer has battled hard and is down to their last Pokémon. Ash is using Charizard. Harrison is also using a high level fire type called Blaziken. Charizard flies up with Blaziken and is in position for a powerful Seismic Toss. After the impact, however, both Pokémon are standing! As Charizard tossed Blaziken down, Blaziken had directed a Flame Thrower attack towards the ground to propel it back up, softening the blow of the impact! Both Pokémon battle well, and it seems like neither will give in, but, in the end, Charizard faints. Harrison continues on into the semi-finals, but is defeated in the next round. After his battle, he tells Ash all about Hoenn and the amazing Pokémon there. As the Silver Conference comes to a close and the gang prepares to leave for Vermillion City, Gary makes a surprising announcement—he’s giving up battling. He’s decided to become a Pokémon Researcher. 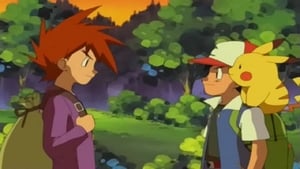