Here's Lookin' at You Elekid!

A troublesome Elekid begins harassing Larvitar only moments before Team Rocket swoops in and captures both rare Pokémon in a high-tensile steel net. As Ash and friends give chase, they bump into their old friend, Casey, who is looking for her Elekid, a Pokémon she had recently acquired to help her in cheering for her favorite baseball team, the Electabuzz. Ash and Casey manage to rescue their kidnapped Pokémon from Team Rocket’s clutches, but in the process lose track of Elekid and Larvitar once again. As Jessie and James move on, they bump into the same Magikarp salesman that has troubled James on many previous occasions. That notwithstanding, James is talked into trading his Victreebel for one of this salesman’s Weepinbell. All parties converge as Ash and Casey find their Pokémon at the same time as Team Rocket. In the heat of battle, James’s Weepinbell evolves into a Victreebel. This isn’t enough to turn the tide of battle, however, and Team Rocket is defeated. Upset by its hapless defeat, James abandons his second Victreebel of the day. 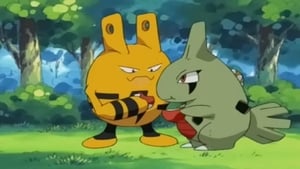