Having earned Pryce’s respect and permission to face the trainer in a gym battle, Ash makes the unlikely choice of sending out Cyndaquil, a Fire Pokémon, to face his opponent on an Ice battlefield. Fortunately, Ash’s strategy pans out as he leads the gym leader to lower his defenses, allowing Ash to take the first victory in a two-on-two match. Next the gym leader sends out his trusty Piloswine, which immediately unleashes a Blizzard attack that completely alters the battlefield, allowing it to make quick work of Ash’s defending Pokémon. With one victory each, the round enters sudden death with each trainer playing his oldest, most reliable Pokémon. A seasoned duo, Ash and Pikachu may match the teamwork of the gym leader and his Piloswine, but will this be enough in a slippery ice arena that is second nature to Piloswine, but whereon Pikachu struggles even to stand? 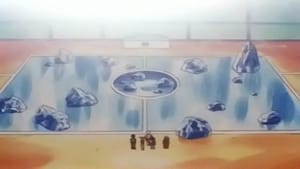