Brock leads Ash and Misty toward a beautiful lake he has read about in his guidebook, but when they arrive at its supposed location, they find nothing but a dried-up stream, surrounded by a number of thirsty Slowpoke. Ash and friends spot a Sumo Crown, but are stopped from approaching it by a young girl and her Slowpoke. The girl explains that she and her Slowpoke are researching legends surrounding the Slowpoke and a supposed Slowking. Long ago, in a time of drought, a chosen Slowpoke had used the Sumo Crown to evolve into a Slowking and then led the other Slowpoke off to paradise. It is her hope that began in this time of drought, a chosen Slowpoke will arise and lead its fellow Slowpoke to safety before it is too late. Numerous Slowpoke attempt to approach the crown, but all are bitten by Shellder and transform into Slowbro before they are able to reach it. The chosen Slowpoke must get by all the Shellder and reach the Sumo Crown before being bitten in order to evolve into a Slowking. Just when it seems all hope is lost, this girl’s own Slowpoke darts off toward the Sumo Crown. 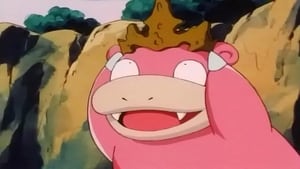