Ash is battling Harrison from Hoenn at the Johto League Silver Conference. Pikachu is very excited to be battling, but Harrison’s Kecleon knocks Pikachu out in Round 1. It’s a close match the whole way through, but one by one Harrison knocks out Totodile, Snorlax, and Noctowl. Ash cleverly guides Bayleef through a rough battle with Harrison’s Houndoom. Houndoom is a fire type Pokémon so it has the advantage, but Ash had Bayleef use its Vine Whip attack to close Houndoom’s mouth. In the end, Bayleef is able to knock out Houndoom! But Bayleef is no match for Harrison’s last Pokémon. Harrison’s sixth Pokémon is one that Ash has never seen before—Blaziken. It’s a fire type Pokémon and it’s at a really high level. Ash has saved Charizard for last. With two strong fire types in the arena, it’s hard to predict the outcome! (To be continued!) 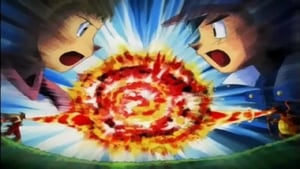