As the Johto League Silver Conference gets underway, Ash will take on Jackson from New Bark Town. Ash is looking forward to the match, but perhaps not as much as his Bulbasaur. Bulbasaur is very anxious to take on Jackson’s Meganium and the feeling is mutual. Bulbasaur and Meganium are so eager to test their skills that they get into a fight before the battle and get caught by Officer Jenny. Luckily for Ash and Jackson, Gary and Harrison convince Officer Jenny that the Pokémon had really just een practicing. After all, trainers whose Pokémon fight get disqualified! With all of the drama, the battle is sure to be intense. Ash wins round one, but Jackson’s Magneton is really strong, and Jackson wins round two. It comes down to Meganium and Bulbasaur in the final round of the match. They’re battling for their honor as grass type Pokémon, and neither is willing to lose. The match ends in a draw. Ash has more points altogether, and so he will proceed in the tournament. But is Ash ready for his next opponent—Gary Oak? 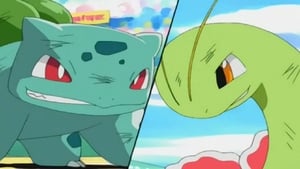