Not on MY Watch Ya Don't!

Dawn’s first Pokémon Contest is just days away, and in order to prepare, she’s searching Jubilife City for a Pokétch—a handy accessory that looks like a watch but has multiple useful functions. To her disappointment, the stores’ Pokétch supply has mysteriously been recalled, but she gets a free Pokétch from Team Rocket. For some reason, Team Rocket are just giving Pokétch away! But a Shinx and its owner, Landis, expose Dawn’s Pokétch as a fake. Landis should know—he’s the son of the Pokétch corporation’s president!

Landis introduces his father to Dawn and her friends, who learn that the Pokétch corporation withdrew its merchandise when it heard that someone was distributing fakes. But Landis’ father does give our heroes a peek at the latest version of the real thing, a Pokétch that measures the Friendship between a Trainer and a Pokémon. As for the fake Pokétch, the truth is soon revealed: Team Rocket is using the fakes to transmit Psyduck’s voice! Now lots of Pokémon are listlessly walking through the streets in a Psyduck-induced trance, headed right for Team Rocket’s hideout, and Landis’ Shinx is one of them!

Of course, our heroes must now stop Team Rocket from scooping up all the Pokémon and taking off in their Meowth balloon. Pikachu and Piplup try to stop them, but Team Rocket just adds those two to the collection as well. Dawn isn’t having any more of this nonsense, so she helps Buneary unleash an amazing Ice Beam that puts the villains’ plans on ice. With the Pokémon freed, Shinx helps charge Pikachu up with electricity and Team Rocket are sent flying once again, without the benefit of a hot air balloon. Now Dawn can receive a real Pokétch of her own, and she’s just about ready to take on the Jubilife Pokémon Contest! 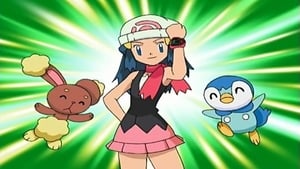