When Dawn comes across a wild Pachirisu, it’s so cute that she just has to catch it! Catching it turns out to be the easy part, because Dawn’s new Pachirisu turns out to be so hyperactive that it wears everyone out before she can even start to train it! Is Pachirisu really too much for Dawn to handle? Before long, Dawn is convinced that she’s not up to the job and she releases it back into the wild.

Ash and Brock cheer Dawn up and convince her to try again with Pachirisu, but Team Rocket has already spotted it and Jessie wants it for herself! Because she released it, Dawn can’t claim that it’s still hers, so now it’s up to Pachirisu to choose which Trainer it likes better. Despite Team Rocket’s bribes of food, Pachirisu chooses Dawn, so Team Rocket chooses to steal it anyway!

After Team Rocket hit our heroes with a blast of goo to keep them glued in place, Pachirisu switches sides and joins them as they take off in their Meowth balloon.

Jessie’s thrilled—until Pachirisu lets off an electric spark that sends Team Rocket flying. Then Pachirisu returns, having only pretended to go with Team Rocket so it could swipe the formula that neutralizes all the sticky goo. Now that it’s clear Pachirisu wants to be part of Dawn’s team, it joins our heroes for real! 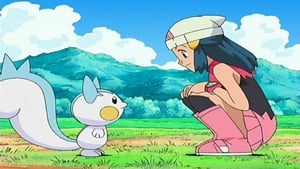