The good news for Ash and his friends is that they’ve entered a tag battle tournament in Hearthome City and everyone made it past the first round. The bad news? Paul is Ash’s partner and the two of them just can’t get along. Before the second round, Paul has his Pokémon team up against Chimchar to deliver some harsh training. Even Team Rocket thinks Paul is being cruel to Chimchar! It’s all too much for Ash, who insists on taking Chimchar to the Pokémon Center.

At the Pokémon Center, Brock asks Paul to explain himself. Paul describes how he first met Chimchar: it was cornered by a group of relentless Zangoose and looked to be in serious trouble. Pushed to its limit, Chimchar let loose with a mighty Flame Wheel that knocked out all its foes! Paul immediately asked Chimchar to join him, but since that day, Chimchar hasn’t been able to recapture that same power. And now, Nurse Joy and Brock tell Paul he has to give Chimchar a rest.

But at the tournament the next day, Paul sends Chimchar in to battle alongside Ash’s Turtwig. What’s worse, their tag battle opponents are fielding a Metagross and a Zangoose! Once again, Ash and Paul simply can’t cooperate. Paul doesn’t even care when Chimchar’s Flame Wheel hurts Turtwig! But when Chimchar freezes in fear at painful memories of its battle with the group of Zangoose, Turtwig still comes to the rescue.

Disgusted, Paul turns his back on Chimchar, and Ash gives Chimchar and Turtwig commands so they can win the battle. After the match, Paul releases Chimchar—for good. As Paul walks away, Ash asks the unhappy Chimchar if it wants to come with him instead… 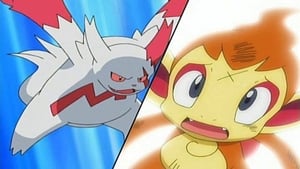