Wild in the Streets!

Continuing to recover from his Oreburgh City Gym battle loss, Ash gets in plenty of training with Turtwig, Pikachu and Aipom. Dawn tries to convince Ash to send home for Pokémon that are strong against Rock Types, but Ash is persistent on using the ones he currently has. Brock lends Ash Sudowoodo to train against, as its Rock Head Ability is immune to such moves as Double Edge.

Back at the Pokémon Center, Dawn finds out that the next Pokémon Contest is at Floaroma Town, where she intends on heading next. Team Rocket steal the Fossil Restorer, unaware that a Pokémon is still inside. Out pops an Aerodactyl, which refuses to be caught by Jessie. Dawn finds Aerodactyl when it attacks the citizens of Oreburgh City; in the ruckus, Kabuto and Armaldo get free as well!

Roark, Brock and Ash triple team the Ancient Pokémon, but Team Rocket show up to steal them all. When Kabuto and Armaldo return to their Poké Balls, Dawn’s Piplup and Buneary use their agility and grace to avoid Aerodactyl’s Giga Impact, allowing Dr. Kenzo to get it back into its Poké Ball! Roark’s newly evolved Rampardos finishes off Team Rocket’s robot and blasts them off, putting everything back as it should be. Ash asks Roark if he can take on Rampardos in their rematch and he agrees, giving Ash time to craft a battle strategy! 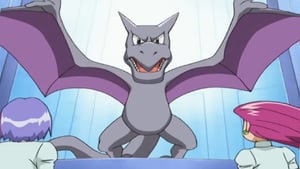