After several adventures, Ash, his friends, and Cheryl the treasure hunter are finally closing in on the elusive Amber Castle. They’ve spotted their first Combee Walls, clusters of Combee that surely indicate the Amber Castle and its trove of Enchanted Honey can’t be far away. Cheryl’s Mothim uses its keen sense of smell to lead everyone towards the scent of honey, and soon they’re deep in a series of tunnels. But Team Rocket has found the tunnels too, and when they start digging for honey, the Combee become angry at all the intruders, including our heroes!

Cheryl’s Mothim uses Supersonic to confuse the Combee, letting our heroes ignored Team Rocket and continue the search for the Enchanted Honey. They find themselves in front of the biggest Combee yet, and pass through to discover the Amber Castle behind it. This glimmering golden structure has a Vespiquen living at its center, and Cheryl apologizes to it for the intrusion.

Just as Cheryl asks Vespiquen for the gift of honey, Team Rocket bursts into the Castle and nearly wrecks it in their attempt to raid the Enchanted Honey. While Ash and his friends rush to repair the damage, Vespiquen and Cheryl’s Mothim deal with Team Rocket, sending them flying before they can do any more damage. After some repairs, the Amber Castle is safe, and Cheryl receives a gift of Enchanted Honey for helping Vespiquen and the Combee. It’s time for this treasure hunter to be on her way, and Ash and his friends are also eager to head for their next destination: Eterna City, where Ash’s next Gym battle awaits! 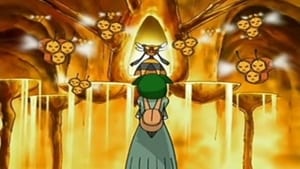