Dawn’s latest training session is interrupted by a Glameow and Misdreavus that seem to be asking for help, and it’s a safe bet that those Pokémon must belong to Zoey! Sure enough, the two Pokémon lead Dawn and her friends to Zoey, who’s fallen and sprained her foot. Our heroes treat the sprain the best they can and help Zoey back to her campsite, where everyone is introduced to Zoey’s new Shellos. That’s when Zoey tells Dawn that the upcoming Hearthome Contest has a double performance format, which means Dawn has to show off two Pokémon at once!

Fortunately, Zoey offers to help Dawn train. First, she shows Dawn some of the combinations she has planned for Glameow and Shellos. Then Dawn tries to develop some combinations of her own with Pachirisu and Piplup, but it’s even harder than she imagined. Things aren’t any smoother when she tries a double battle with Buizel and Buneary against Pikachu and Aipom, but all Dawn can do is practice until her team gets it right.

Jessie, now disguised as Jessilina the Coordinator, drops in for a surprise visit and challenges Dawn to a double battle. Zoey’s not about to let Jessilina pick on a double battle novice, so she accepts the challenge instead! Injured or not, Zoey still has all her skills intact—her Glameow and Shellos overcome Jessie’s Dustox and Seviper with power and style. Zoey’s example encourages Dawn to keep on trying, and the two Coordinators look forward to their next meeting at the Hearthome Contest! 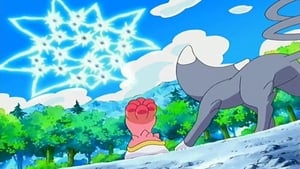