O'er the Rampardos We Watched!

Ash may have lost his battle at the Oreburgh Gym, but he wants a rematch and he’s down at the Oreburgh mine to train hard for round two. His hard work inspires Dawn to go back to town and train her own Pokémon for the upcoming Contest in Floaroma Town. But over at Oreburgh’s museum, the fossil restorer machine has vanished, together with the fossil that was inside! It could only be the work of Team Rocket, who gets a big surprise when the stolen machine finishes reviving the fossil and a very irritated Aerodactyl emerges. After giving Team Rocket a good clobbering, it flies off toward Oreburgh City.

Aerodactyl causes a big commotion as it soars over the city, surprising Dawn and alerting the museum’s scientists to the fate of their missing fossil. In the confusion, a Kabutops and Armaldo break out of their quarters and the scientists go to get Roark’s help. Ash and Brock team with Roark to stop the rogue Pokémon, but Team Rocket appears and snatches Kabutops, Armaldo, and Roark’s Cranidos!

Surprisingly, it’s Aerodactyl who comes to the rescue—it swoops in and blasts Team Rocket once more, freeing the Pokémon and giving the scientists a chance to safely recall Kabutops and Armaldo to their Poké Balls. But now who’s going to stop Aerodactyl? The guys all give it their best, but this time Dawn shows up to save the day! She has Piplup and Buneary team up to pin Aerodactyl so the scientists can put it in a Poké Ball. Then Roark’s Cranidos evolves into Rampardos so it can take down Team Rocket, and the fossil restorer is returned to the scientists. All of which gives Ash an idea for his rematch with Roark… 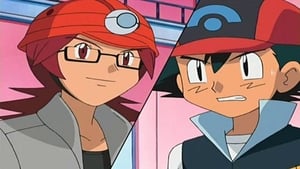