It’s a rough day for hero and villain alike, as Dawn’s Piplup struggles to perfect a move for the upcoming Pokémon Contest and Team Rocket struggles to find something to eat. Team Rocket lucks out and finds a giant pile of berries in the middle of a field, but nearby footprints suggest the berries already belong to someone—or some Pokémon. Team Rocket steals the berries anyway, but a slip-up lands some of the berries in the possession of a Ludicolo trio. Then the berries’ real owners, a Golduck and its Water Pokémon friends, show up and mistake the Ludicolo for the real berry thieves!

Team Rocket steps in and defeats Golduck, all part of their plan to get the Ludicolo on their good side so they can snag them for the boss. Alas, this plan is quickly abandoned when the grateful Ludicolo turn out to be too energetic for Team Rocket to bear. As for the dejected Golduck and its friends, they have the good fortune to run into Piplup. Piplup take charges and goes right up to the Ludicolo, determined to show them the error of their ways. Team Rocket watches it all while feasting on their ill-gotten berries and, unsurprisingly, decides this is a great opportunity to steal a whole lot of Pokémon at once.

Team Rocket pounces on the gathered Pokémon with the help of their Magikarp submarine. Piplup tries to save them, but Team Rocket launches a swarm of robot Remoraid that are just too much for Piplup to handle. That is, until Piplup finally pulls off a Contest-worthy spinning Bubblebeam move that wrecks the robots and turns the tide in our heroes’ favor! Once it’s revealed that Team Rocket had the berries all along, Golduck apologizes for falsely accusing the Ludicolo and the Pokémon join forces to beat Team Rocket. And with an amazing new move mastered, Dawn and Piplup can look forward to their upcoming Contest with newfound confidence! 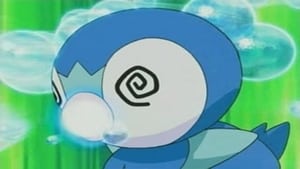