An Elite Meet and Greet!

Dawn and Ash are hoping a friendly battle with Turtwig will help Dawn’s new Buizel warm up to its new companions. But Buizel wants to play rough, and it won’t even listen to Dawn’s commands! Our heroes head to a Pokémon Center after the battle and that’s where they meet Lucian, a Trainer who specializes in Psychic Pokémon. He’s also one of Sinnoh’s Elite Four, a top group of Trainers—and Buizel is itching to have a battle with him!

Lucian agrees to the match and sends out his Bronzong. Buizel ignores Dawn’s commands again and continues to battle its own way, but Bronzong is just too tough. Buizel is soon knocked out of the match, but it’s so used to winning that it has difficulty accepting this defeat. Later Lucian tells Dawn that this loss could be very important: if Buizel doesn’t learn how to overcome this setback, who knows what might happen?

What happens, however, is that Team Rocket takes this opportunity to trap Buizel in a cage so they can steal it. Lucian thinks this is actually a good thing! Indeed, Buizel is so angry at being captured that it forgets about its defeat and breaks out of the cage. Then, Lucian shows Dawn how to adapt to Buizel’s style so they can work together to beat Team Rocket. After the villains are defeated, Dawn and Buizel go one more round with Lucian and Bronzong, and they’re already demonstrating improved teamwork! Before he leaves, Lucian encourages Dawn to keep training and says he’ll see our heroes again someday. 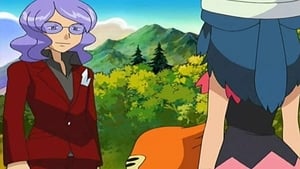