Dawn is still feeling a little blue after her early exit from the Hearthome Pokémon Contest, so her friends convince her to compete in a tag battle tournament along with Ash and Brock. Our heroes head to the opening ceremonies to learn who their randomly chosen tag partners are. Dawn’s new partner is Conway, a calculating Trainer with a Slowking. Brock’s lovely partner is Holly, who will compete using her Wingull. And Ash’s partner is—Paul? Even Paul’s Elekid doesn’t get along with Pikachu! Ash and Pauls chances of winning the Soothe Bell prize arent looking too great.

Dawn and Conway are up first, battling a team using Koffing and Scyther. Dawn isnt so sure about Conway, but the two of them turn out to be a good pair! Conway has Slowking use defensive moves to cover for Dawn’s Piplup, letting Piplup concentrate on offensive moves, and they win their match. Then Brock and Holly have their Sudowoodo and Wingull work together to defeat a Yanma and Bagon whose Trainers are too busy arguing to battle effectively. That doesn’t bode well for Ash and Paul, who still aren’t getting along.

Ash and Paul are up against opponents using Magmar and Rhydon—not a great type match-up for Pikachu and Paul’s Chimchar. When Rhydon uses Surf, Paul orders Chimchar to use Flame Wheel directly into the waves! Its incredibly risky, so Ash tells Pikachu to disrupt the Surf attack instead. That protects Chimchar and knocks out Rhydon, but Paul doesnt appreciate the interference. They manage to win this round, but at the rate they’re arguing, they might not last through the next! 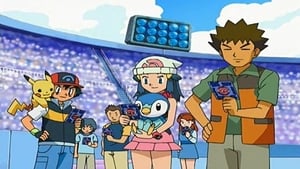