Dawn of a New Era!

Dawn is still trying to catch her first wild Pokémon, but Ash’s coaching isn’t helping at all and both Trainers are getting annoyed. The outlook suddenly gets much brighter when Nando, a traveling Pokémon bard, has his Budew use Sunny Day to lighten the mood. To show Ash her skills, Dawn requests a Contest battle with Nando, but Budew’s Grass-type moves are too tough for Piplup. Budew wins and our heroes head to a Pokémon Center, where they learn that Nando can’t decide whether to dedicate himself to Pokémon Contests or Gym battles.

To help him decide, Ash and Dawn set off to find Nando again, only to end up deep in the forest. It’s too late to get back to the Pokémon Center, but three very familiar and suspicious-looking individuals offer them a free inn room for the night. Of course, it’s all another Team Rocket scheme to snatch Pikachu! Nando and his Budew come to the rescue, and now it’s Ash’s turn to ask Nando for a friendly battle.

Ash decides to use Pikachu to battle Budew. Nando’s style may be elegant, but even though Budew evolves into Roselia during the match, it’s still not enough to defeat Pikachu. Still, Nando had so much fun battling Dawn and Ash that he’s decided to do both Gym battles and Pokémon Contests! Our heroes say goodbye to Nando with promises to meet again, then continue their journey towards Dawn’s first Contest and Ash’s first Sinnoh Gym battle. 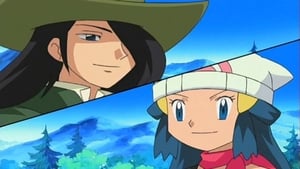