Ash’s Turtwig brings everyone’s attention to a young Hippopotas that’s stranded on the ledge of a cliff. Ash hauls the Hippopotas to safety, and it insists on following him. Then Rhonda and the Sinnoh Now news team arrive on the scene, and they want to follow Ash around, too! Rhonda wants to see Ash reunite the Hippopotas with its migrating herd. Team Rocket, of course, wants to steal Hippopotas, but between Hippopotas’s Yawn attack and Ash, Team Rocket barely even manages to slow our heroes down.

Of course, Team Rocket won’t quit that easily. They come back for another try, using a piece of fruit to lure Hippopotas into their balloon. But when Hippopotas uses Sand Tomb, their plans are sunk just as fast as their balloon, and Hippopotas happily returns to Ash. Next Ash has to cross a narrow bridge across a river, and when Team Rocket attacks, Hippopotas falls in the river! For a Ground-type like Hippopotas, that’s bad news.

Hippopotas is rushed to the nearest Pokémon Center, where Nurse Joy has it feeling fine in no time. The quest for the Hippopotas herd resumes, and the gang encounters a strangely familiar group of sand salesmen. They turn out to be Team Rocket, of course, but the thieving trio didn’t count on Hippopotas and that Yawn attack, which puts Jessie to sleep. Meowth and James’ Cacnea are no match for Pikachu and Ash’s Turtwig, and once they’re gone, our heroes keep searching until they find the Hippopotas herd. The lost Hippopotas is back where it belongs and Ash is headed back on the road to Hearthome City—after a Yawn-induced nap, that is! 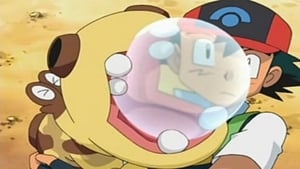