When last we left our heroes, Ash and Brock were searching for Dawn and Pikachu, unaware that a stranger was spying on Ash’s latest Pokémon capture. Now the stranger reveals himself as Paul, a Trainer with a tough Elekid and a surly attitude. Paul catches his own Starly and challenges Ash to a battle—but without Pikachu, Ash doesn’t have enough Pokémon for a 3-on-3 battle! Paul leaves, leaving Ash embarrassed.

Elsewhere in the forest, Team Rocket swoops in and snatches Pikachu again despite the best efforts of Dawn and her Piplup. Ash shows up just in time to stop the villains, giving all our heroes a chance to finally meet each other. Then it’s off to the Pokémon Center, where they find Professor Rowan. They all visit Rowan’s lab where there’s a package waiting for Ash, but there’s another surprise waiting for him as well: Paul!

This time, Ash is more than ready for a battle. Both Trainers send out Starly, but Paul’s Starly comes out the winner. Then it’s Ash’s Aipom against Paul’s Chimchar, and Ash claims the victory! But in the last round, Elekid and Pikachu’s battle is almost too close to call. Neither Ash nor Paul is happy with a draw. Ash sure doesn’t appreciate Paul’s attitude, either. Paul turns down Ash’s request for another battle, but it’s a safe bet that their rivalry is far from over! 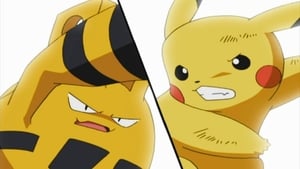