Gettin' Twiggy with It!

Team Rocket’s latest Pikachu-snatching plan slips up, and Pikachu ends up lost in the woods. It’s found by a friendly Turtwig who defends Pikachu from Team Rocket, but mistakes Ash for a foe as well! During this commotion, Ash and Pikachu are hit by Sleep Power from a nearby Oddish. Turtwig takes this opportunity to grab Pikachu and run off into the forest. Turtwig’s friend Clara, a kind old lady, happens upon the scene and explains to our heroes that Turtwig is the leader of the local Pokémon. Looks like this time it’s taking its responsibilities a little too seriously!

Ash finds Turtwig and explains that he and Pikachu are really best friends, though Turtwig doesn’t believe a word of it until Pikachu confirms Ash’s story. Now that everyone is on friendly terms, it’s time for a lovely outdoor meal at Clara’s lakeside home. However, nobody realizes that Team Rocket’s Magikarp submarine is lurking in the water. The villains snatch Turtwig and Pikachu, but Ash and Piplup pursue them and Pikachu and Turtwig are soon free.

That’s not enough to stop Team Rocket, of course. They come back for another kidnap attempt, only to be defeated by Pikachu. Ash and his friends then prepare to leave, but Turtwig wants to come along—after a battle with Ash, that is. Pikachu wins the match, which means Turtwig is now the newest member of the team! 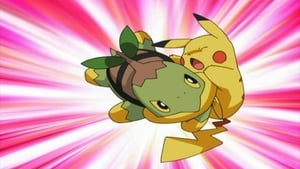