All Dressed Up with Somewhere to Go!

What could convince our heroes to take a time-out from their journey to Eterna City? A Pokémon Dress-Up Contest where Pokémon try to imitate other Pokémon! Ash and Pikachu, Dawn and Piplup, Brock and Croagunk, even Team Rocket—they’re all entering the contest in hopes of winning the Pokémon Egg prize! But will any of them be able to beat the reigning champion, a singing Chatot?

In this contest, the key is to stay in character. So when Piplup, pretending to be Weedle, gets a little too excited and uses Bubblebeam, Dawn and Piplup are knocked out of the first round. Ash and Brock make it into the second round along with Team Rocket, and James wants to win the contest fair and square. But to his dismay, dishonorable duty calls: Jessie can’t resist stealing the prize Pokémon Egg, forcing Team Rocket to make a quick getaway. Together with Officer Jenny, our heroes chase after Team Rocket so quickly that Brock’s Croagunk doesn’t even stop to take off its Politoed costume!

There’s no doubt who’ll win this showdown, especially once Mime Jr.’s Teeter Dance hits Team Rocket instead of its target. In all the confusion, Team Rocket drops the stolen Pokémon Egg. Buneary quickly catches it, Team Rocket is sent packing, and everyone returns to the contest for the final results. After the judges tally their votes, the final winner is Brock’s Croagunk, who stayed in character as Politoed even while chasing Team Rocket! Brock accepts his Pokémon Egg, leaving him and his friends to ponder two important questions. When will the Egg hatch—and just what Pokémon will it turn out to be? 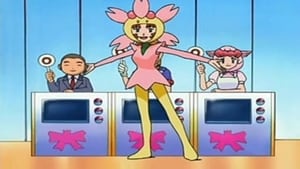