A Secret Sphere of Influence!

Ash and his friends are in Eterna City for Ash’s next Gym battle, but first they have to help solve a heist at the Eterna Historical Museum! Someone has stolen the Museum’s Adamant Orb, an artifact which is said to increase Dialga’s power, and the security footage suggests a Sunflora was one of the culprits. Team Rocket stole the Orb with Meowth disguised as Sunflora, but it’s the Pokémon bard Nando and his Sunflora that have been cornered by Officer Jenny! Luckily, our heroes and their recent acquaintance Gardenia, who turns out to be the Eterna Gym Leader, are ready to vouch for Nando’s innocence.

This is a day for duplicates, because there’s another Officer Jenny in town from Viridian City, too! Everyone splits up to search the Museum for the real culprit, with the Eterna City police especially eager to find the Orb first and uphold the honor of their department. But it’s Piplup, Pikachu, and Nando’s Sunflora who spot Team Rocket gloating over their theft, and soon backup is on the way.

Now that Meowth is no longer in the Sunflora costume, Team Rocket tries to bluff their way out of this jam. No such luck! But it’s risky to battle Team Rocket while they’re holding the precious Orb, so Officer Jenny from Eterna City has her Stunky stun Team Rocket with its powerful stench. Once Gardenia retrieves the Orb, it’s a simple matter to defeat Team Rocket. Our heroes are then left to ponder the legends surrounding Dialga and Palkia… as well as the true motivation behind this attempted theft! 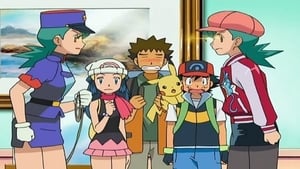