Mutiny in the Bounty!

On the way to Floaroma Town, our heroes see a Salamence-riding woman steal a Gardevoir from a Trainer named Melodi. Ash and Pikachu come to the rescue, but the mystery woman sends out a Drapion and swipes Pikachu! Team Rocket refuses to be outdone by another Pokémon thief and make their big entrance, except the woman steals Meowth as well before making her getaway.

What’s going on? It’s the latest heist by Pokémon Hunter J, a merciless Pokémon thief for hire! Together with Melodi, Officer Jenny, and even Team Rocket, our heroes set out to stop her. Melodi’s Kirlia is able to locate J’s next position, and Ash doesn’t wait for back-up—he runs off and finds J in the middle of stealing an Absol.

It’s hard to stop her when she has a Salamence to back her up, forcing Ash and Team Rocket to take the indirect route instead: they stow away under her vehicle and hitch a ride onto her aircraft. But the Hunter soon realizes there are intruders onboard, so Ash and Team Rocket battle their way through the ship and reach the hangar where Meowth, Pikachu, and Gardevoir are located. Ruthless as always, J decides to solve this problem by jettisoning the entire hangar! Gardevoir’s Teleport saves the day, but J has escaped, and our heroes can only hope that one day she’ll be brought to justice. 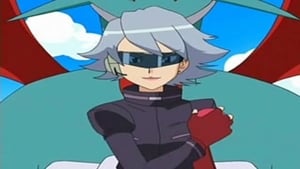