Paul has just won his badge at the Oreburgh Gym, but he’s reluctantly persuaded to stick around and watch Ash’s battle the next day. Ash is in the middle of strategizing for the match when he finds out that Paul gave away his Azumarill because it wasn’t tough enough, which only makes Ash dislike Paul’s style even more! Meanwhile, Team Rocket are touring the Oreburgh Mining Museum to get a closer look at its Fossil Restorer machine, the key to their latest criminal plot.

When Ash’s battle finally begins, Roark sends out Cranidos first and Ash uses Aipom to counter with speed and agility. However, Cranidos can be pretty nimble too, and it wins its round. Pikachu is up next, but Cranidos is still going strong and Pikachu just isn’t having much of an effect. Paul gets up to leave in disgust, which gets Ash and Pikachu fired up. Roark responds by having Cranidos use its powerful Head Smash, and Ash has to bring in Turtwig to finally knock out Cranidos.

Roark’s Onix comes in and defeats Turtwig in one hit, so now it’s all up to Pikachu. Pikachu uses Thunderbolt to break up the field so Onix can’t maneuver as quickly, a clever strategy until Onix brings the battle to a Screech-ing halt! Not only is Ash’s match over, but he’s been defeated in front of his rival Paul. Now he’s going to have to figure out a way to get back on track! 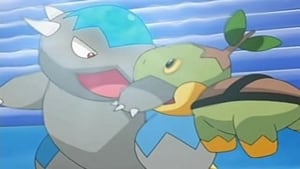