Buizel Your Way Out of This!

On the way to Eterna City, our heroes go fishing in hopes of catching a powerful Buizel that’s been spotted in a nearby river. They’re joined by Zoey, Dawn’s friend and rival, who’s in the area to do some fishing, but it’s Dawn who ends up with Buizel on her fishing line. Buizel defeats Dawn’s Piplup and promptly challenges Zoey. Zoey’s Glameow is no slouch, but Buizel wins that battle and then still has the energy to take on Pikachu and win! Now all three Trainers are determined to catch it—and so is Team Rocket, who’s secretly observed the entire scene.

Buizel is in the middle of a workout when Dawn and her friends manage to find it again. But Team Rocket catches it in a net and tries to take off in their balloon, and Ash’s Turtwig cuts Buizel loose with Razor Leaf. Dawn also tries to rescue Buizel, although Buizel doesn’t seem convinced that it needs any help at all! In fact, freed from the net, it helps defeat Team Rocket and still wants another battle with Piplup.

It’s clear that Buizel is a strong, powerful Pokémon, but this time Dawn and Piplup realize they have a creative edge. By using the combinations they’ve been developing for Contests, Piplup is able to defeat Buizel and Dawn can finally catch it in a Poké Ball. Zoey stays behind to do some fishing for a new Pokémon of her own, but Dawn and her new Buizel are headed to Eterna City for Ash’s next Gym battle! 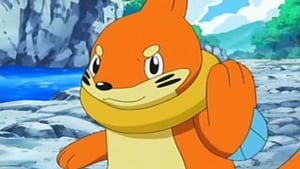