Dawn’s mother Johanna has sent her a special outfit to wear for her first Pokémon Contest, which is just a day away! While Dawn tries on out her new Contest outfit, she meets another Coordinator, Zoey, who has a Glameow. Then Dawn is due for some friendly training with Ash and Pikachu, and Dawn’s Piplup looks good until Ash’s Aipom interrupts the battle to show off its moves. It seems that Aipom doesn’t want to watch a Contest, it wants to be in one! So for Aipom’s sake, Ash decides he’ll enter the Contest too.

As Ash soon finds out, not only do Coordinators in Sinnoh like to dress up for their Contests, they use some special effects as well. In Sinnoh Pokémon Contests, each Pokémon’s Poké Ball is put into a Ball Capsule and decorated with seals that create quite a showy entrance! Ash and Dawn aren’t the only ones hoping to make a big entrance in the Jubelife Contest; Team Rocket is around, and Jessie has her sights set on a big victory while James and Meowth have settled on starting a seal-selling scam.

As the Contest begins, Dawn is backstage trying to fix her hair. Zoey shows up to help her out and as the two Coordinators talk, Dawn learns that Zoey already has her first Contest Ribbon. Zoey also has a Misdreavus which she shows off in the first round with some spectacular moves. Jessie borrows James’ Carnivine to make her Sinnoh debut as Jessilina, and Ash and Dawn pull off their first round appeals without a hitch. All four Coordinators—well, three Coordinators and one Trainer—will move on to the next round! 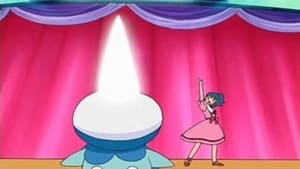