Getting the Pre-Contest Titters!

With time running out before the start of the Floaroma Town Pokémon Contest, Dawn and Pachirisu are getting in as much training as they can. But it’s not just Ash and Brock who are watching from the sidelines, because Dawn’s friend Kenny is here to compete in the Contest, too! Both Dawn and Kenny are from Twinleaf Town, and Kenny is full of embarrassing stories about Dawn’s childhood. What’s more, he chose a Piplup for his first Pokémon, just like Dawn, but his Piplup is now a Prinplup with an attitude!

To add injury to insult, Kenny turns down a challenge from Dawn and asks to battle Ash and Pikachu instead. Pikachu should have the type advantage, but Kenny’s Prinplup counters Pikachu’s attacks by using its own moves in creative ways. It’s so impressive that Team Rocket makes a grab for Prinplup—in order to boost Jessie’s chances of Contest victory, James and Meowth are on a mission to steal Pokémon!

Prinplup is unable to escape, so Dawn sends Piplup to stop Team Rocket. Piplup uses a newly-learned move, Whirlpool, to give Prinplup back some of its pep, and the two Water-type Pokémon then beat Team Rocket with a double Bubblebeam. Today’s teamwork was terrific, but both Dawn and Kenny have their eye on winning tomorrow’s Contest. What will happen once these old friends become new rivals…? 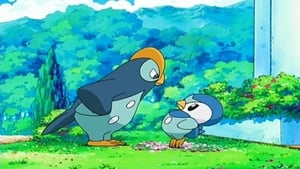