Ash and his friends have come across a newsworthy diversion: two notorious Pokémon Trainers who’ve won 16 battles in a row, attracting the attention of Rhonda the reporter and her Sinnoh Now news team. Ash wants to battle these Champ Twins, Bryan and Ryan, but they only have tag battles. So while the cameras are rolling, Ash and Dawn team up to battle Bryan’s Croconaw and Ryan’s Quilava with Turtwig and Piplup.

Ash and Dawn are eager to show their stuff, but their teamwork could use much more work! The two of them don’t coordinate moves so soon Piplup and Turtwig are getting in each other’s way, and once Ash and Dawn are arguing too, the battle’s as good as lost. Bryan and Ryan win the battle, which only starts another argument between Ash and Dawn—and Turtwig and Piplup too! Once they come to their senses, they apologize and resolve to take on the Champ Twins again, this time as a real tag team. 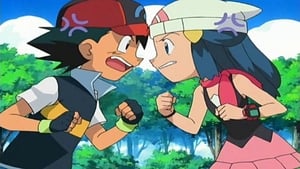