Arrival of a Rival!

The battles are about to begin in the Jubelife Pokémon Contest, and in the running are Dawn, Ash, Jessie (disguised as Jessilina), and a Coordinator named Zoey. Ash will be battling Zoey, and Zoey is shocked to hear that Ash isn’t really a Coordinator. As far as Zooey’s concerned, if you’re not serious then you don’t belong in a Contest! When Ash’s Aipom and Zoey’s Glameow go head to head, it looks like Zoey may be right. Contests aren’t like Gym battles, as Zoey proves when her Glameow wins the round with creative usesof its Iron Tail and Shadow Claw moves.

The second round pits Dawn and Buneary against Zoey and Glameow. Even though Dawn has had a chance to watch Glameow in action, Buneary’s graceful jumps and powerful Ice Beam just can’t manage to top Glameow’s moves. When time runs out, Zoey is declared the winner. After the match, Dawn calls her mother but receives a stern but encouraging lecture on being more independent. After all, Dawn has friends she can turn to for support!

The final round of the Contest is a battle between Zoey and, of all people, Jessie! Zoey’s Glameow defeats Carnivine with time left to spare and Zoey wins her second ribbon. Before she heads out of town, she exchanges some encouraging words with Dawn. They’re bound to meet again at another Contest—and now Dawn has a new rival who’s also a new friend! 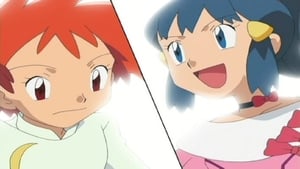