What You Seed is What You Get

Ash and friends are leaving Mauville City, but Ash wants to go to the Pokémon Gym in Lavaridge Town while May wants to compete in a Pokémon Contest at Fallarbor Town. Max discovers the two towns are close to each other, so they decide on Fallarbor Town first.

Team Rocket stumbles into a huge watermelon patch but an Electrode disguised as a giant watermelon sends them blasting away. Some watermelons float downriver to be eaten by Ash and the gang. A Grovyle and Slugma attack them, and a girl named Natasha accuses them of being thieves. Her Electrode reveals the truth, so she invites them on a tour of her watermelon patch. After Natasha claims she’s never lost a double battle, Ash challenges her.

Ash sends out his Treecko and Corphish to challenge Natasha’s Pokémon, but they are quickly overmatched. Corphish and Slugma KO each other, leaving Treecko and Grovyle to duke it out. The battle is interrupted by Team Rocket returning to steal more watermelons.

Grovyle uses its Bullet Seed, but is gagged by an attack from Team Rocket’s robot. Treecko uses Bullet Seed and manages to knock the melons down, and Pikachu zaps the robot, sending Team Rocket blasting off again.

Natasha and Ash resume the match, but Treecko is defeated by the power of Grovyle’s Bullet Seed attack. The kids settle down to enjoy some juicy watermelon, and Ash and Pikachu try to encourage Treecko by spitting seeds at it. Treecko retaliates by using the real Bullet Seed move on them. 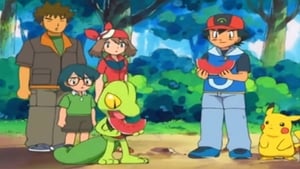