Combusken’s Fire Spin is spiraling out of control in the Lilycove Contest Hall. Combusken protects May, who takes control by having the Fire- and Fighting-type unleash a fireball and perform Sky Uppercut. The performance earns May a decent, but lowered score for losing control in the first place.

Meanwhile, Ash is keeping an eye on the contest from outside while he continues to teach his Swellow Aerial Ace.

Kelly puts on a great performance with Grumpig, using Psychic to catch thrown PokéBlocks. A disguised Jessie is up next with Chimecho, who she hurts and forces to use Astonish—an unusual move that actually earns her a perfect score!

In the next round, May faces off against Jessie, and the battle is pretty much even, until Chimecho misses with Double-Edge, letting Combusken hit it with Sky Uppercut. Team Rocket retaliates with yet another one of their attacks, but Swellow drives them off with its new Aerial Ace attack.

May and Kelly face off in the final round, May taking a beating until she comes up with an idea to use Fire Spin on the ceiling, which rains down on the whole room so Grumpig can’t possibly escape. May claims victory, winning her third ribbon. 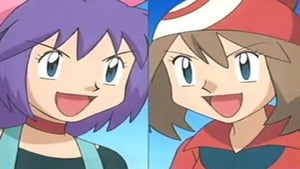