Ash and friends stop at a Pokémon Center where May’s Skitty pops out of its Poké Ball and causes trouble. A kid that looks a lot like comes up to yell at them—and his name is also Max! The two Maxes get into a fight.

May and Max run into the other Max outside, saying hello to his Surskit. To avoid a fight, Brock suggests that everyone take out their Pokémon. Team Rocket arrives on the scene, but Skitty grabs Jessie’s hair. Surskit escapes while Jessie goes berserk in another one of Team Rocket’s giant contraptions, sending everyone blasting off.

While the kids are looking for Surskit, the other Max admits that he’s jealous because he doesn’t get to travel with his Pokémon. They find Surskit in a spring, but are attacked by Team Rocket again. The Maxes team up, and Surskit uses Water Pulse to break a rock dam, washing Team Rocket away.

Jessie emerges from the water to grab Surskit, but is hit hard by Skitty. Then a double-attack from Surskit and Pikachu sends the crooks blasting off for good.

The other Max decides to go traveling with his Surskit, and both Maxes shake hands, now good friends. 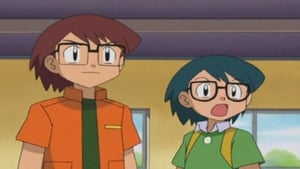