The Princess and the Togepi

Ash and friends welcome an old friend—Misty! She’s received an invitation to a Togepi Festival, and is soon greeted by Team Rocket disguised as the operating committee for the festival. They escort Misty and Togepi inside a large building, which turns out to be a concealed zeppelin. Ash and friends climb aboard before takeoff, and the aircraft makes its way to the Mirage Kingdom.

Misty leaves the zeppelin and is met by Colonel Hansen, who demands that she turn over Togepi. Ash and Brock step forward to protect her, sending out Mudkip and Pikachu. Misty, May, and Max flee while Pikachu and Mudkip battle Colonel Hansen’s two Ninjask.

Colonel Hansen’s Shedinja catches up with Misty, who sends out her Corsola. During the battle, Togepi is blasted away and found unconscious in a stream by the princess of the Mirage Kingdom. A servant tells the king that the princess has finally found a Togepi, and they all gather in the princess’ quarters to look at it.

Misty arrives and demands the return of her Togepi. The princess and the servant explain that Togepi are worshipped in the Mirage Kingdom, and in order to become ruler, the princess must have one in her possession for the coronation ceremony. Colonel Hansen wants the throne for himself, which is why he tried to steal Misty’s Togepi. The princess decides to send Misty and friends home with Togepi.

As the gang are about to board the zeppelin, a mirror image of the temple appears in the sky. Togepi begins to glow and float toward it. Colonel Hansen arrives with Team Rocket, and his Shedinja attacks the group using Solar Beam, which Pikachu attempts to block with Thundershock. 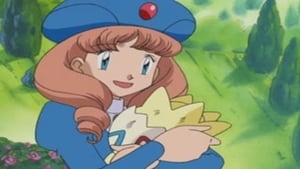