Ash and friends are headed to Petalburg City so he can earn his fifth Gym badge. They fall into yet another Team Rocket scheme to steal Pikachu but are saved by a wild Solrock.

The kids arrive at a nearby village where the stream has completely dried up. They send out their Water-type Pokémon to search for water, and Brock’s Lotad falls into the empty well. When he pulls it back up, the Pokémon evolves into Lombre. An old woman runs out and calls it their “Water Lord.”

Her granddaughter Mary explains that they receive their water from a stream flowing out of a Lombre shrine, which dried up shortly after a meteorite fell to earth. Solrock has been spotted in the woods since then, so they blame it for the drought.

The villagers perform a rain dance with Lombre, and many wild Pokémon join in. Ash and friends use Lombre’s dance to draw Solrock out, but May’s Skitty runs off toward a cave. When May and Mary explore the cave, they discover a machine built by Team Rocket siphoning water from the stream.

A battle begins, and Solrock ends up using Ember to protect the villagers from Team Rocket’s attacks. Pikachu sends the villains blasting off again, while Solrock continues to burn. Brock’s Lombre and Mudkip cool down Solrock with their Water Gun attacks, and the steam creates a rainstorm.

The villagers decide to worship Solrock instead, while Ash and friends depart for Petalburg. 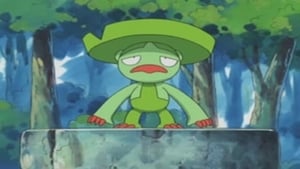