Drew loses a Pokémon battle to the mysterious “Phantom,” a masked Pokémon Trainer using a Dusclops. Because of the injuries sustained by his Roselia, Drew has to drop out of the Pokémon Contest in Verdanturf Town.

May is there to compete with her Skitty, and while practicing she is challenged to a battle with Phantom that Ash accepts instead. The battle is interrupted by the arrival of a woman in a limo who chases the Phantom into the woods.

The woman reveals she is looking for her son Timmy, who has been missing a lot lately, usually when the Phantom is around. The kids follow her to a mansion where they meet the entire family. Timmy’s father reveals that Tommy is the Phantom, disguising himself only because his mother hates Pokémon.

Brock dresses up as the Phantom to fool the mother, but Team Rocket shows up to unmask the Phantom for a huge reward. Skitty’s Blizzard attack frees Brock but also unmasks him by accident. Brock quickly runs off, and it appears that the mother did not see his face. Timmy decides to compete in the Pokémon Contest. 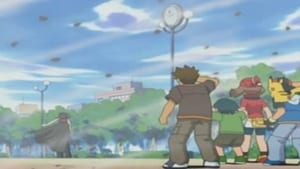