Ash and friends are in a town close to Petalburg City, when their picnic is gobbled up by a passing Gulpin. They overhear an emergency announcement instructing everyone to evacuate.

The kids and a local shopkeeper are accosted by a large group of Gulpin. Officer Jenny saves them, bringing the friends back to the Pokémon Center. They meet Nurse Joy and Professor Jacuzzi, who are working to stop the Gulpin from eating all of the town’s food supplies.

The professor’s first plan involves a giant PokéBlock to lead the Gulpin away. Team Rocket tries to steal the PokéBlock, but their balloon is shot down by the Gulpin. The Gulpin follow the PokéBlock out of town.

The Gulpin try to return through the sewer, but Jenny and Joy block the way. The Gulpin emerge onto the street. Professor Jacuzzi arrives with a device that beams them up and shoots them away, but it breaks down with one Gulpin left to go. Ash sends Treecko out to battle and the machine restarts, grabbing both Pokémon. It explodes, and the two of them become oversized.

To avoid destroying the town, Treecko leads Gulpin to a lake, but is too tired to battle (shrinking back to normal). May suggests capturing Gulpin in a Poké Ball. Nurse Joy gives the professor a Heavy Ball, and he captures the Gulpin, vowing to restore it to its normal size. 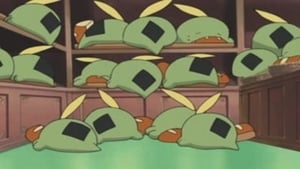