Ash and friends are still on their way to Fallarbor Town and stop by Lake May for a rest, where they spot an Illumise and some Volbeat practicing for the May Festival. The Volbeat Trainer, Romeo, is a big klutz, and he causes an accident that sends all of the Pokémon crashing into the water. Ash and Brock send out their Water-type Pokémon to save them.

It turns out that Romeo is in love with the Illumise Trainer, Juliet, and he gets nervous around her. May decides to help him practice confessing how he feels by having Ash dress up as Juliet.

Meanwhile, Team Rocket has Meowth pose as a Volbeat, luring Illumise into a trap. Juliet goes searching for her Pokémon and instead comes across Romeo rehearsing with the kids. Romeo sends all of his Volbeat to track down Juliet’s Illumise.

Team Rocket uses Sweet Scent to lure all of the Pokémon into a powerful vacuum, capturing Ash and Pikachu in the process. Pikachu shocks the vacuum to shut it down, and the one free Volbeat uses Quick Attack to destroy it, freeing everyone. The combined Volbeat use Signal Beam to send Team Rocket blasting off again.

Romeo confesses how he feels to Juliet, and they decide to marry. At the May Festival, the Volbeat and Illumise put on a spectacular performance. 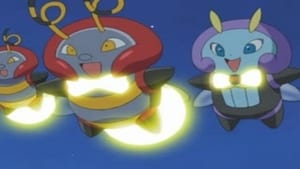