Ash uses Corphish in his Gym battle with Flannery. Flannery chooses Magcargo first, which is defeated by Corphish’s Crabhammer.

Meanwhile, Team Rocket is digging a tunnel to steal Magcargo and Pikachu during the battle, but they accidentally hit a pipe and are sent blasting off into a hot spring.

Ash recalls Corphish and sends out Treecko, hitting Slugma hard but getting burned by Flamethrower. Ash sends out Corphish again, but Slugma uses Yawn to put Corphish to sleep. Pikachu goes out to battle next.

Pikachu knocks out Slugma with a powerful Thunder attack, but Flannery calls out Torkoal. Pikachu can’t get through Torkoal’s Iron Defense, and is KO’d by Overheat.

Treecko is sent out again, but is quickly knocked out by Overheat. Ash sends out the sleeping Corphish, who takes some damage before finally waking up. To get through the Iron Defense, Corphish hits Torkoal with Crabhammer from the side, flipping the Fire-type over and then knocking it out with Bubblebeam.

After the battle, Flannery receives some advice and praise from her grandfather, and presents Ash with his Heat Badge. 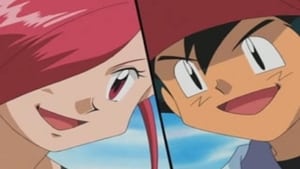