A tree inhabited by Swablu and Altaria is struck by lightning during a thunderstorm, and one of the Swablu fails to fly away before the tree crashes.

The next morning, May and friends are walking through the woods when they find the wounded Swablu. Swablu puts the kids to sleep with Sing, but Torchic wakes them up by pecking their noses. Their shouts alert a park ranger, who brings everyone to a rest station.

May wants to stay there until Swablu gets better, so Brock helps her with caring for the little Flying-type. Eventually its wing heals, but it still can’t fly. The ranger explains that the accident with the tree was very traumatic, so the kids try to re-teach Swablu to fly. Eventually Max comes up with a successful idea to trick Swablu into flying using “magic powder” spread by Beautifly.

The ranger locates the Swablu’s flock at a lake and drives the kids there, but they are stopped by Team Rocket. The trio steals Swablu and escape in their balloon. Swablu uses Sing, but James’ Cacnea uses Pin Missile while asleep, damaging the balloon.

The balloon becomes engulfed in flames, but Swablu manages to overcome its fear of flying to escape. Brock’s Mudkip and Lombre put out the fire, and Team Rocket is sent blasting off.

The gang finally arrives at the lake, but the flock appears to be gone. May offers Swablu a place with her, but the flock suddenly reappears, and instead she lets Swablu rejoin its fellow Pokémon. 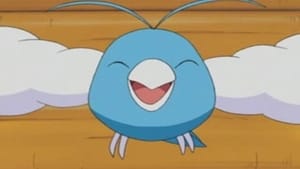