Ash challenges Gym Leader Norman for a badge. While they battle, Team Rocket is busy digging a tunnel under the Gym.

Norman’s Slakoth begins with Hidden Power, and Pikachu can’t hit it. Pikachu is then immobilized by Slakoth’s Blizzard, so Ash switches the Electric-type out for Torkoal. Torkoal takes out Slakoth with Flamethrower.

In turn, Torkoal is taken down by a Scratch attack from Vigoroth. Ash sends Pikachu back out, and when the two Pokémon make physical contact, Vigoroth is paralyzed by Pikachu’s Static ability. Pikachu uses Iron Tail to knock out Vigoroth, but also faints.

In the end Ash’s Grovyle faces off against Norman’s Slaking. Slaking manages to counter all of Grovyle’s attacks, and then uses Earthquake. The shaking disrupts Team Rocket’s plans, and puts them up against some angry Dugtrio.

Low on HP, Grovyle’s Overgrow ability increases its Attack power, and the Grass-type knocks Slaking out with a combination of Pound and Leaf Blade. All his Pokémon defeated, Norman awards the Balance Badge to Ash.

However, Max is upset at his father’s loss, so he runs off with the badge. Norman talks things over with Max, explaining that the experience of losing is just as important as winning. Max returns the badge to Ash, who celebrates winning his fifth Gym badge. 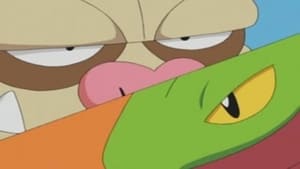