Outside Crossgate Town, the kids meet a Trainer named Shane and his Swablu. He is practicing for the PokéRinger competition, a contest where flying Pokémon battle in the sky to capture a ring and place it on the goal post.

Ash and May both sign up with Taillow and Beautifly. Meanwhile, Team Rocket has also arrived in town. As a child, James received training from a champion PokéRinger, and decides to enter the competition as well.

The competitors are matched up into three separate groups of four. In the first group, Shane and his Swablu use the wind to their advantage and win the round. Ash faces the previous PokéRinger champion in the next group, but knocks out his Volbeat to win. In the last group, May and James face off against each other, but Dustox (borrowed from Jessie) scores the goal.

In the next round, Ash’s Taillow faces off against a Skarmory and wins easily. Shane goes up against James, but his Swablu gets blinded by the sun, giving Dustox a chance to score.

While the competition is going on, Jessie and Meowth have been tricking Trainers into leaving their Pokémon behind for a special “relaxing” treatment. They trap the Pokémon into a net and prepare to run. Meowth tries to order James to leave with them, but James refuses.

Ash and James begin the final round, but they are interrupted by a freak tornado in the middle of the field that blocks their path to the ring. Ash sends Taillow into the swirling wind, and its determination causes it to evolve into Swellow. Swellow snags the ring and leaves the tornado, with Dustox on its tail. Swellow punts the ring onto the goal, and James is dragged away sobbing by Team Rocket.

Swellow frees the stolen Pokémon, and then Pikachu sends Team Rocket blasting off with Thunderbolt. Ash attends the award ceremony, where his picture is displayed alongside the previous PokéRinger champions. 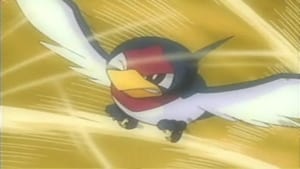