Ash and friends have stopped for lunch, and Brock has made food for all of their Pokémon. Corphish eats up its share quickly, so it snatches up Torchic’s food. Corphish and Torchic start to fight, firing furious blasts of Bubblebeam and Ember at each other.

Team Rocket is starving, and they end up stealing apples from a group of Shroomish. Some of the Shroomish become angry enough that they evolve into Breloom, then attack Team Rocket. The thieves run into the camp where the kids are, and eat their leftover food. But the Breloom show up and attack, sending everyone blasting off to various parts of the forest.

Torchic and Corphish run into each other, and eventually find Max and Meowth. The quartet stumbles into the food stash of the Shroomish by accident, and have to fend off attacks from the Breloom. They are found by Pikachu and Swellow, but none of the Pokémon can fight off the Breloom.

Torchic evolves into Combusken, and begins a one-on-one battle with the leader of the Breloom. A titanic exchange of kicks and punches ends in a double knockout. The two Pokémon become friends, and together they attack Team Rocket. In the end, everyone sits down for a shared meal. 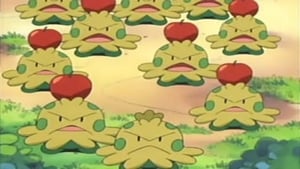