Ash begins his Gym battle with Winona by sending out Grovyle against her Altaria. Grovyle takes out Altaria with Leaf Blade. Next up is Pelipper, a Water-and-Flying-type so Ash counters with the Electric-type Pikachu. Pelipper uses Steel Wing on the ground, and Pikachu uses Thunderbolt with no effect. Team Rocket arrives to steal Pikachu, but the force of Pikachu’s continued Thunderbolt sends them blasting off.

It turns out that Pelipper is being grounded by its Steel Wing, making the Electric-type attack ineffective. Pelipper uses Hydro Pump, which Pikachu uses as a conduit to shock the other Pokémon. It results in a double KO.

Ash sends out Grovyle again, which is then finished off by Winona’s Swellow. Ash counters with his own Swellow. Winona’s Pokémon has the advantage since it has more experience battling in mid-air, especially with its Aerial Ace. After taking several hits, Ash has his Swellow use Wing Attack on the ground, which gives his Swellow a chance to counterattack, knocking out Swellow and winning him the Feather Badge. 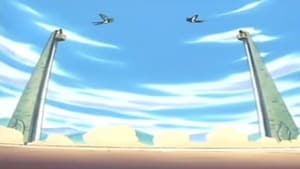