Ash and his friends are walking through the desert when they pass out because of the heat. They are rescued by the Winstrate Family, who in return for the hospitality offered, want to have a Pokémon battle between the four Winstrates and all four of the kids.

Team Rocket also faints in the desert, where they are discovered by Vito Winstrate. He left home a while ago to battle in the Pokémon League, but he’d rather just raise Pokémon. His family is very proud of him going off to the League, and he’s afraid of them finding out the truth. James offers to help him talk to his family.

The battle begins back at the Winstrate residence. Brock uses his Mudkip against Victor Winstrate’s Zigzagoon, but is knocked out by a surprise Thunderbolt attack. May takes out Victoria’s Roselia with her Beautifly. Max doesn’t have any Pokémon yet, so he borrows Ash’s Corphish and easily knocks down Vivi’s Marill, breaking the little girl’s heart.

Ash takes on Grandma with Pikachu. The battle is close until her Camerupt uses Eruption and begins to chase Pikachu everywhere. Camerupt gets confused and charges the Winstrate’s house instead.

Vito and Team Rocket are watching the whole thing, so Vito secretly has his Alakazam start a rainstorm to calm Camerupt down. Team Rocket tries to steal Pikachu but Vito uses his Pokémon to stop them. Grandma Winstrate realizes that Vito is helping them and never went to the Pokémon League. She announces that it’s okay for Vito to choose his own path. Vito leaves the Winstrate farm, to become the best he can be at raising Pokémon. 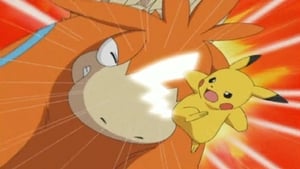