May is competing in her second Pokémon Contest and manages to make it to the next round along with Drew, Grace, and a disguised Jessie. Jessie has attached a device to her Dustox that produces beautiful rainbows when it performs an attack, making the attack even more beautiful.

May battles against Jessie, with Beautifly delivering enough of a beating to break the rainbow device and defeat Dustox. Caught cheating, Jessie is disqualified. Team Rocket tries to make trouble, but Pikachu sends them blasting off.

In the next battle, Grace takes on Drew and beats his Roselia in a decisive victory with her Medicham.

Grace moves on to the finals to battle May. Medicham takes a commanding lead until May tries a combo involving Tackle and Silver Wind, pinning Medicham down. May takes the lead with one minute to go. The two Pokémon meet in a head-on collision, and though both Pokémon go down, May has more points and is declared the winner.

Drew congratulates May, and then the kids are off to Lavaridge Town for Ash’s next Gym Battle. 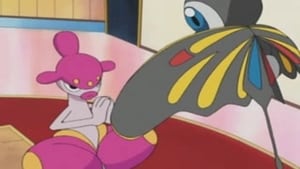