Ash and friends decide to visit Professor Birch. On the road they are nearly run over by Birch in his jeep, on his way to the port to pick up Professor Oak. Ash and Brock join him, while May and Max head to his lab.

May and Max are admiring the Hoenn starter Pokémon at the lab (Treecko, Mudkip, and Torchic), when Professor Oak shows up. He shows them the Kanto starter Pokémon he brought: Squirtle, Bulbasaur, and Charmander. May befriends the Bulbasaur.

Team Rocket arrives and kidnaps all six starter Pokémon, and Professor Oak and the siblings go after them. They track the thieves to a Secret Base, but fall into a trap and are imprisoned. Team Rocket also takes May’s Poké Balls.

Meanwhile, Birch, Ash, and Brock are hot on the trail with the help of a Poochyena.

Oak and the siblings escape from imprisonment with the starter Pokémon. Oak has a Zubat use Supersonic on Team Rocket while the Bulbasaur uses its vines to grab May’s Poké Balls. After running, they eventually find their way to an outside door, but can’t break out.

Professor Birch and company arrive outside the door, where they use Water-type attacks on the door and then have Pikachu blast it with electricity. A group of Pokémon on Oak’s side knocks down the now-weakened door with Tackle or Pound.

Team Rocket shows up again, but all of the Pokémon team up with their different attacks to send the crooks blasting off. After saying goodbye, the kids depart for Fortree City. 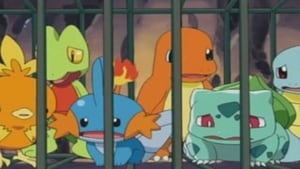