Ash meets an old friend: Thatcher from Mt. Lighthouse! He’s a member of a pep squad school that cheers at Pokémon battles, led by a man named Sheridan.

A disguised Team Rocket offers Sheridan money to cheer for their Pokémon battles. To test the effectiveness of the cheering, Brock and Ash offer to battle against Team Rocket.

Brock’s Forretress knocks out James’ Cacnea, who is secretly revived using Helping Hand. Sheridan wears a mask containing a small microphone that he uses to give directions to Pokémon hidden inside the pep squad’s giant drums.

After Cacnea wins, it’s Ash and Pikachu versus Jessie and Seviper. Jessie doesn’t pay attention to the battle, and Seviper is quickly taken down. Sheridan issues commands to revive Seviper repeatedly.

Max sneaks nearby and knocks the drums over, revealing the Pokémon concealed inside. Sheridan runs off, and Ash manages to encourage Pikachu to victory.

Team Rocket then reveal themselves, but Pikachu is too weak to fight them off. Plusle and Minun revive Pikachu, whose Thunder attack starts a thunderstorm. A bolt of lightning hits Team Rocket’s balloon, sending them blasting off.

The members of the pep squad decide to go home, Thatcher continues his Pokémon journey, while Ash and friends continue to Lavaridge Town. 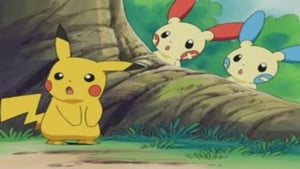