Pearls are a Spoink's Best Friend

Team Rocket talks to Giovanni on the video phone, and he yells at them for not making progress, threatening to replace the three of them.

The kids are eating breakfast when Skitty runs off and encounters a Spoink that has lost its pearl. The Spoink shows how it rolled away, so the kids help look around the forest. Spoink keeps mistaking various round objects for its pearl—like an Igglybuff—and putting them on its head.

Just as they find the real pearl, all of them are caught in a Team Rocket trap, but Ash’s Corphish helps them get out. Spoink drops its pearl and Meowth catches it. Team Rocket runs off to a nearby carnival.

At the carnival, James runs into the Magikarp salesman, who is now selling Feebas. Drawn by the promise of Feebas evolving into a Milotic, Jessie trades the pearl. But when their new Feebas is swimming, its paint washes off, revealing just a Magikarp.

Ash and friends arrive, and both groups go looking for the salesman. Brock and Max reveal the scam, and then everyone confronts the Magikarp salesman. The kids start to battle Team Rocket, and the salesman slips away in the confusion. Spoink passes out, but Max grabs the pearl and puts it on Spoink’s head. Spoink then uses Confuse Ray to send Team Rocket blasting off. 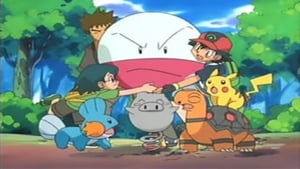