Ash and friends are traveling when a Zangoose runs up in front of them. It is followed by its Trainer, their old friend Nicolai. Ash challenges Nicolai to a Pokémon battle.

The battle is being watched by Team Rocket. Jessie sends out her Seviper (to steal Pikachu), but Zangoose senses it and the two Pokémon start to fight. They fall into the river, and Ash sends Corphish to drive Seviper off so they can rescue Zangoose.

While the injured Zangoose is recovering back at their camp, Ash shows Nicolai how to battle Seviper. Team Rocket returns and the battle between Zangoose and Seviper continues. James and Meowth steal Pikachu while Jessie is helping her Seviper.

The friends go to get Pikachu back, but James’ Cacnea accidentally sends Pikachu flying. Wobbuffet grabs Pikachu and runs off, trailed by everyone.

Nicolai notices that they can’t catch Wobbuffet because it’s running in a zig-zag pattern, so he instructs his Zangoose to do the same to avoid Seviper’s attacks. Zangoose then uses Crush Claw to win the battle, while Pikachu uses Thunder to send Team Rocket blasting off again.

Nicolai congratulates Zangoose, and Ash and Nicolai continue their battle. 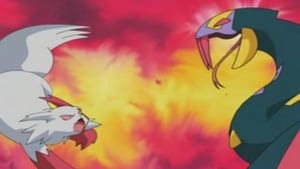